Until 3 march 2014 you can now visit “Le Surréalisme et l’objet” in Centre Pompidou in Paris, the first large-scale exhibition devoted to Surrealist sculptural techniques. Although Surrealisme is not jedermanns Sache its historical importance  and its influence on contemporary art is undeniable.  The surrealists gave ‘functional’ objects a place in the history of art, demystifying the concept of what art is by putting urinoirs and snow shovels  on display as artobjects. The Surrealists focused on these ready-made objects as a response to an ideological situation that denied the power of dreams and the subconscious. As the “objectivization of the dream”, the object, in their eyes, was an effective means for poetically subverting reality. Working in the iconoclastic tradition of Dada they caused an evolution in art, all to stirr human sensibilities. And it still works it wonders. From Marcel Duchamp's first ready-made – the “porte-bouteille” of 1914 – to Miró’s sculptures of the late Sixties, the exhibition lights the various stages of the Surrealists’ sculpture through the use of everyday objects.
The exhibition starts with Alberto Giacometti’s “Boule suspendue” (1930-1931) and continues with strange artworks. Interesting is Hans Bellmer’s doll that represents André Bretons idea, put down in the first surrealist manifesto in 1924, that mannequins were the most effective objects for producing the ‘marvellous’ sought by Surrealism, and for arousing the sens of ‘the uncanny’ inspired by Sigmund Freud by his discovery of a doll in a tale by Hoffmann. Bellmer asked dollmaker Lotte Pritzel to make the doll. Pritzel was approached by Oskar Kokoschka to make a dummy as a substitute for Alma Mahler when she ended the relationship, so Bellmer knew Pritzel was a great artist. Bellmer's doll was a marking point in the mannequinerie of the surrealists as the doll is embued with the erotic dimensions associated with the female.

The exhibition also gives a look back at the Surrealist Exhibition of Objects staged at the Charles Ratton Gallery in May 1936. Breton stated: “The objects that form part of the Surrealist exhibition of May 1936 are of a kind calculated primarily to raise the interdict resulting from the stultifying proliferation of those objects that impinge on our senses every day and attempt to pursue us that anything might exist independently of these mundane objects must be illusionary…”. That sounds interesting but it is also just great to see the surrealistic objects combined with primitve art, as was done back in 1936.
The sculptures produced during the Second World War by Max Ernst, Alexander Calder and Pablo Picasso illustrate the place now occupied by the object in Surrealist art through the use of a sculptural technique similar to the art of assemblage.
A part of the exhibition is dedicated to contemporary pieces that show the influence of the Surrealists in todays art by Ed Ruscha, Mona Hatoum, Heim Steinbach, Cindy Sherman, Luis Garcia Berlanga  and others. 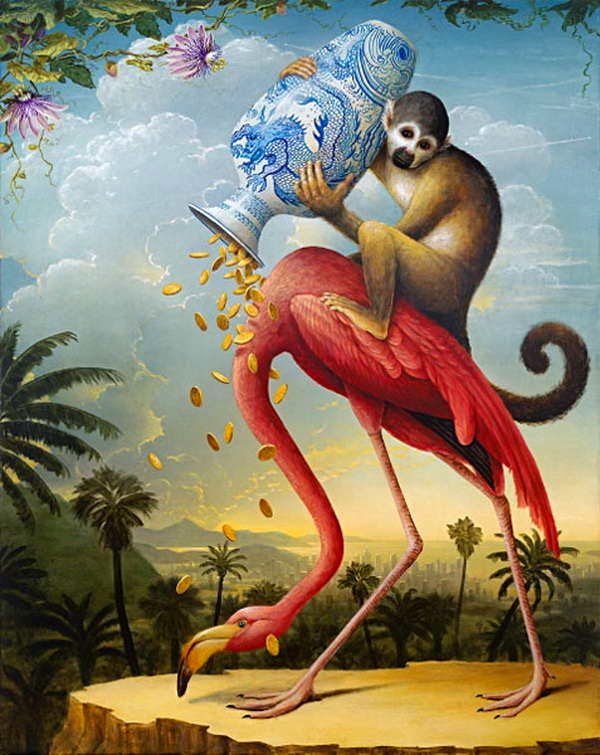