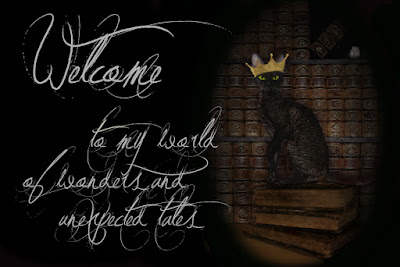 If I could have chosen how to live my life, I'd rather been a luscious, lazy cat, for I prefer animals above
mankind. But since choosing wasn't possible I took up art as a way of life. My career as an artist could have started at an early age in primary school when I won a drawing contest of the National Traffic Safety Organisation with a meticulous doodle of a pirate ship full of drunken boatsmen, but I decided to first study art history at university, and then go to an art academy 'to do textiles'. An education in the graphic design field also followed. After expressing myself in the 'traditional' art-techniques I finally found my medium in photomanipulation and collage which I combine with hand-drawing by digital means. By using photographical elements of the real world I show that phantasy and reality are often intertwined. My work is surreal highly-detailed and narrative. I like to create  sinister kingdoms where animals act as humans.  These dreamed and melancholic images often reflect the dark undercurrent of the world. After an initial smile, the beholder is left behind with a weary feeling of discomfort.